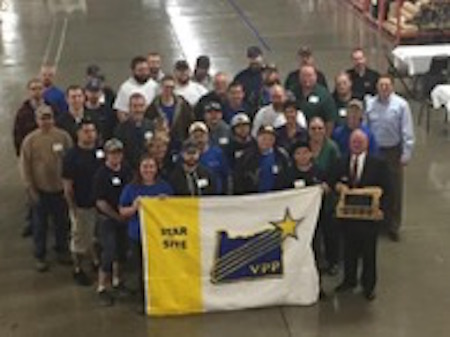 Workers at Duro-Last’s Grants Pass, OR, facility earned Star Site Status, which boosts safety and health – not to mention profits – in the workplace.

Duro-Last, Inc.’s Grants Pass, OR, manufacturing facility knew safety was a top priority, but it had to find a way to reduce its Days Away, Restricted or Transferred (DART) rate.

The rate was almost doubled the industry average, so that is when the world’s largest manufacturer of custom-fabricated single-ply roofing systems looked at the Occupational Safety and Health Administration’s (OSHA) Safety and Health Achievement Recognition Program (SHARP).

Upon earning SHARP status, the company found the process not only improved the health and safety of its workers, but also bolstered the company’s production and profitability.

On top of that, after the 44 employees at the Grants Pass facility not only earned SHARP status, the facility took it to the next level and is now considered a Voluntary Protection Program (VPP) Star Site. Star Site status represents the highest achievement for companies participating in the VPP.

OSHA’s VPP recognizes employers and workers in the private industry and federal agencies who have implemented effective safety and health management systems and maintain injury and illness rates below national Bureau of Labor Statistics averages for their respective industries.

Dropping its DART Rate
Duro-Last’s Grants Pass facility began working toward Oregon OSHA’s Safety and Health Achievement Recognition Program (SHARP) in 1997. At that time, the company, which employs 760 people corporate-wide, had a Days Away, Restricted or Transferred (DART) rate of about 7.2 in an industry that was averaging in the high 3s and low 4s.

SHARP recognizes small business employers who have used OSHA’s On-site Consultation Program services and operate an exemplary injury and illness prevention program. Acceptance into SHARP from OSHA is an achievement of status that singles a company out among its business peers as a model for worksite safety and health.

OSHA’s On-site Consultation Program offers free and confidential safety and occupational health advice to small and medium-sized businesses in all states across the country and several territories, with priority given to high-hazard worksites. On-site Consultation services are separate from enforcement and do not result in penalties or citations. Consultants from state agencies or universities work with employers to identify workplace hazards, provide advice on compliance with OSHA standards, and assist in establishing injury and illness prevention programs.

Over the next four years, management had the safety committee increasingly play a key role in guiding safety and health program decisions, and employees became more involved in those decisions. Steadily, the company improved its safety and health management systems. Meanwhile, its DART rate decreased. When the company qualified for SHARP status in 2001, it had a DART rate of 1.7. The industry was averaging 3.7. The company graduated from SHARP in 2006, with a DART rate of 1.3. By contrast, the industry average was 4.1.

During its SHARP journey, the company noted to Oregon OSHA consultants the process not only improved the health and safety of its workers, but also bolstered the company’s production and profitability. The SHARP process positioned the company for further success as part of the VPP program.

Hart has long recognized that a strong alliance with Oregon OSHA would benefit the company and its employees, customers, and vendors. Likewise, Oregon OSHA understands the importance of building relationships with employers to advance workplace safety and health programs. The relationship between Duro-Last and Oregon OSHA has lasted more than 29 years. Oregon OSHA consultants have toured the Grants Pass facility to check on workplace safety, health, and ergonomics and to help create effective safety programs. When Duro-Last expanded and purchased the 75,000-square-foot facility in the North Valley Industrial Park area of Grants Pass, the association with Oregon OSHA continued.

“OSHA’s consultative services have proven to be invaluable over the years,” Hart said. “This is especially true since we are now a SHARP graduate and in our recent recognition as a VPP Star Site.”

A longtime member and supporter of the nonprofit Oregon SHARP Alliance, Duro-Last’s commitment to continuous improvement through partnerships and tours of other VPP sites helped improve safety, such as installation of strobe lights (front and back) on forklifts, shadow-boarding, updated emergency action plans, and improvements to the near-miss portal. From Sept. 7, 2007, to Jan. 6, 2016, Duro-Last achieved 500,000 hours of working accident-free. Moreover, the company maintained a DART rate of 0.0 from 2013 through 2015.

“We are proud of the work we have done with OSHA that has allowed us to learn the best practices of other SHARP and VPP companies and helped us understand the importance for continuous improvement in safety programs,” Hart said. “We thank Oregon OSHA for recognizing the dedication our Grants Pass employees have to safety. Without their safety mindset, this recognition would not have been possible.”