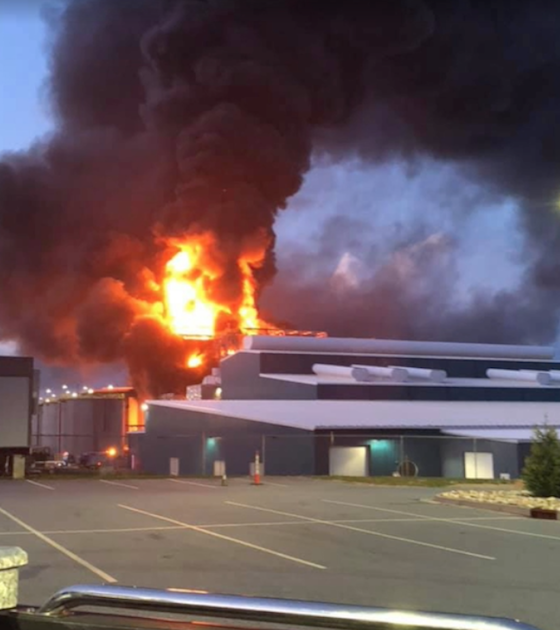 Billowing flames and plumes of smoke at a burning zinc processing plant in Mooresboro, NC, forced officials to evacuate residents within a half mile radius of the blaze.
Source: Chesnee Community Fire Department

More than 24 hours later, residents who live near a fire-damaged zinc processing plant in Mooresboro, NC, were allowed return to their homes.

The evacuation order was put in place by Rutherford County officials around 2 a.m. Monday, after a fire broke out late Sunday night at the American Zinc Recycling plant in Mooresboro caused toxic sulfuric acid to release into the air. The evacuation included all homes within a half mile of the plant.

“The situation at the facility and surrounding neighborhood is now stabilized following the precautionary evacuation of 48 families by Rutherford County Emergency Response officials over concerns of potential exposure to resulting smoke and airborne emissions,” American Zinc Recycling said Tuesday.

“Based on tests performed by emergency officials of air samples for various air pollutants — including sulfuric acid — at various locations surrounding the facility, we understand that exposure of sulfuric acid emissions at the monitored levels does not pose a health risk to citizens in the community.”

The Centers for Disease Control and Prevention said sulfuric acid can harm the skin, eyes and lungs, and “severe exposure can result in death.”

Local officials became concerned about the air when tests showed gear worn by the dozens of firefighters on site “tested positive for hazardous materials.”

A temporary shelter was set up at the Chase High School auxiliary gymnasium, officials said.

American Zinc Recycling said Monday it is cooperating in state and local investigations into the cause of the fire.

No employees were injured in the fire, the company said. Cause of the fire remains under investigation.

The plant is owned by American Zinc Recycling Corp, based in Pittsburgh, and produces “special high grade zinc,” according to the company.