Two crew members of the CSX train were initially trapped in a flaming locomotive along the river’s edge before climbing out and waiting for firefighters to rescue them by boat. They were taken to the hospital with minor injuries, officials said. There weren’t any other reports of injuries.

CSX said in a statement the train derailed into the Big Sandy River around 7 a.m. due to a rock slide over the tracks. The derailment happened in the small Pike County community of Draffin, about 160 miles southeast of Lexington, Kentucky. A wooded area caught fire behind some homes shortly after the derailment occurred.

One locomotive and other cars caught fire.

The blaze was still going nearly four hours later. Kentucky State Police spokesman William Petry said authorities were not sure whether diesel fuel or ethanol was fueling the blaze, but authorities decided to let the fire burn itself out since it did not pose a public safety threat.

“Luckily the train wasn’t going very fast, so it saved them from a major disaster,” Petry said.

The Mountain Water District intake on the Russell Fork of the Big Sandy River was closed until the intake water can be tested, the Kentucky Energy and Environment Cabinet said. 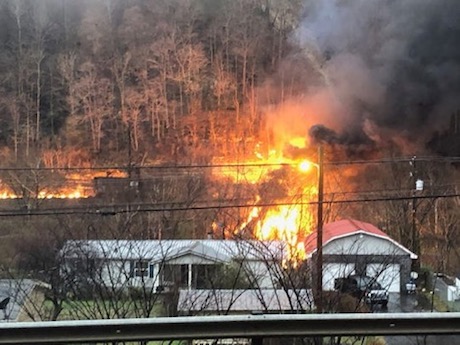 “As we monitor this situation, our top priority is the health of families who rely on the Mountain Water District, and I appreciate the Emergency Response Team’s swift action,” Kentucky Gov. Andy Beshear said.

No homes were damaged in the sparsely populated area and residents who were briefly evacuated were allowed to return.

CSX said it had mobilized its emergency teams and were working with local authorities.

Petry said the slide that caused the derailment was large.

Heavy rains have caused flooding and multiple rock slides in the region since last week. Pike County got 3-4 inches of rain last week and probably another inch over the last 48 hours, said Dustin Jordan, a meteorologist with the National Weather Service.

The National Transportation Safety Board said it was sending team of six to investigate the derailment.

The public is being asked to avoid the area if possible, police said.