Electricity production is one of the industries that uses the most water in the country each day, but that may soon change.

That is because researchers at Sandia National Laboratories are helping the largest power plant in the United States identify the most efficient and cost-effective strategies to reduce water use.

They developed a first-of-its-kind comprehensive system dynamics analysis that can show power plants with wet cooling systems how it can save them money. The analysis could eventually be used at other plants as federal regulators begin to reduce the power industry’s allowed water supply. The researchers have also redesigned and patented an air cooling system to make waterless cooling more energy efficient and possible over a wider range of operating conditions.

The Palo Verde Nuclear Generating Station near Phoenix converts heat from nuclear reactions into electricity. The heat boils water, creating steam that drives turbine generators. Steam leaving a turbine must be cooled and condensed before it is reused.

Over 40 percent of all the water used in the country is for wet cooling at power plants. Typically, large thermoelectric power plants are located near lakes or rivers so operators can draw a regulated amount of water, run it through a condenser to cool steam leaving the turbines, and discharge roughly the same amount they withdrew.

But the Palo Verde plant has limited access to water because it is in the middle of a desert. Its cooling water is treated wastewater, which is becoming increasingly expensive as other customers — who are willing to pay higher prices for water — emerge. To curb rising costs, operators want to reduce the plant’s water use by about 9 million gallons a day. Annually, that savings is roughly equivalent to a 16 square mile pool of water one foot deep, said Bobby Middleton, a nuclear engineer at Sandia.

Saving Water
Other thermoelectric power plants will be looking for water saving approaches in the future, as rising populations, increased per capita energy usage and potential federal regulations reduce supplies of cooling water. The Sandia analysis could be used to save water at these power plants too, whether they run on coal, natural gas or nuclear energy.

To reduce the plant’s water use, operators at Palo Verde first looked at commercially available solutions. When they realized that nothing available could meet their needs, they turned to Sandia Labs to help identify which cooling systems under development might eventually offer the greatest water savings. 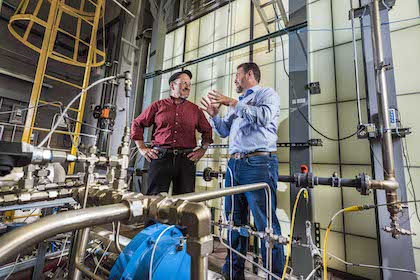 To evaluate different emerging technologies, Middleton developed software that combines the physics of the cooling process — such as fluid flow, heat transfer, atmospheric evaporation and water treatment — with the financial impact of different solutions. Sometimes, a certain technology saves a plant money through increased efficiency; other times, reductions in water use deliver overall cost savings.

“No one has created a system dynamics analysis that simultaneously considers all these factors before,” he said. “It helps us predict the benefits we might see from a particular technology so that we spend time only testing the most promising approaches.”

The wastewater that arrives at Palo Verde contains silica, calcium, magnesium and phosphate ions. These salts concentrate as the cooling water evaporates in the cooling system, possibly forming new minerals that might clog the cooling towers. Currently, operators add lime, soda ash and acid to the wastewater before it enters the cooling tower to reduce the possibility of mineral formation.

Cost Effective Mineral Removal
Middleton and Sandia chemist Patrick Brady are using the model to identify less expensive ways to remove ions at different points in the cooling cycle. For example, the Sandia researchers are examining the feasibility of desalinating discharged cooling water so it can be reused. Otherwise, the water is too salty for reuse and must be evaporated from large ponds.

Researchers finished the first phase of the project developing the analysis software. The next phase involves using the software to identify the most promising water saving technologies, including alternative water treatment approaches, as well as dry and hybrid coolers that use supercritical carbon dioxide instead of the standard refrigerants in use in commercial technology. The final phase of the project involves testing the most promising technology in a laboratory setting in the hopes that a cost-effective solution can be installed at Palo Verde in 2026.

While evaluating effective cooling technologies, Sandia researchers also are working to improve existing solutions. Earlier this year, Middleton and his colleagues earned a patent for redesigning an air cooler to use supercritical carbon dioxide to transfer heat from steam to air. This change makes indirect dry cooling feasible over a wider range of conditions while increasing the system’s efficiency.

In these commercially available systems, the liquid refrigerant boils as it absorbs heat from the steam and condenses into a liquid as it loses that heat to air. This change from liquid to gas releases energy that causes the refrigerant to circulate naturally through a heat exchanger.

Performance Benefits
The performance benefits with this design come from the amount of air needed to refresh the supercritical carbon dioxide for another round of cooling. A heat exchanger with supercritical carbon dioxide uses less air to cool water to the same temperature as a traditional dry cooler with a sub-critical refrigerant; it can also make water cooler using the same amount of air. Both impacts improve the overall energy efficiency for the cooling process.

“The expanded operating conditions also mean that there are more times of the year plants can use dry cooling,” Middleton said.

The researchers plan to test Sandia’s design against state-of-the-art, commercially available technology, and they are currently analyzing it as a potential solution for the Palo Verde plant.

Due to the decreasing availability of water, what was once the cheapest resource for thermoelectric power plants is quickly becoming one of the most expensive aspects of electricity production.