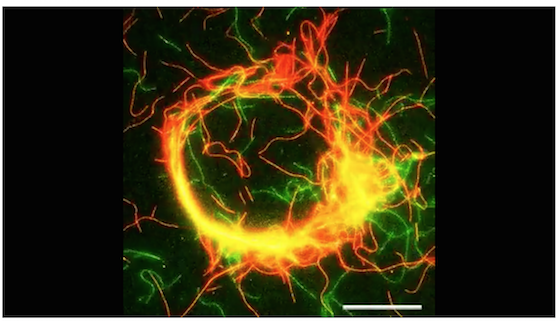 Images show flexible microtubules forming swarms with circular motions and them dissociating in response to the d-DNA input signal.

DNA-assisted molecular robots are in development that autonomously swarm in response to chemical and physical signals could pave the way for future nano-machines.

The world’s smallest “swarm robot” measures 25 nanometers in diameter and 5 micrometers in length, and exhibits swarming behavior resembling motile organisms such as fish, ants and birds.

“Swarm robots are one of the most elusive subjects in robotics,” said Akira Kakugo of the research team at Hokkaido University, which also worked with researchers at Kansai University. “Fish schools, ant colonies and bird flocks show fascinating features that cannot be achieved by individuals acting alone. These include the formation of complex structures, distinct divisions of labor, robustness and flexibility, all of which emerge through local interactions among the individuals without the presence of a leader.” Inspired by these characteristics, researchers have been working to develop micro-scale swarm robots.

In the a study, Kakugo and his collaborators have built a molecular system composed of the three essential components of a robot: Sensors, information processors and actuators. They used cellular proteins called microtubules and kinesins as the actuator, and DNA as the information processor. Microtubules are filamentous proteins that serve as the railways in the cellular transportation system, while kinesins are motor proteins that run on the railways by consuming chemical energy obtained from hydrolysis of adenosine triphosphate (ATP). The team took a reverse strategy and built a system in which microtubules move randomly on a kinesin coated surface.

A major challenge in swarm robotics is the construction of a large number of individual robots capable of programmable self-assembly. The team addressed this issue by introducing DNA molecules into the system known to hybridize when they have a complementary sequence. The chemically synthesized DNA molecules with certain programs in their sequences are conjugated to the microtubules labeled with green or red fluorescence dye.

Moreover, they added a photosensitive sensor to the system, azobenzene attached to the DNA molecules. They utilized isomerization of the azobenzene that occurs reversibly in response to irradiation of visible or ultraviolet light to switch on or off the interaction between DNA molecules. This enabled the photo-irradiation induced switching between the solitary and swarm state of the microtubules. The team also demonstrated the swarms of microtubules move with a translational or rotational motion depending on the rigidity of the microtubules.

“This is the first evidence showing that swarming behavior of molecular robots can be programmed by DNA computing. The system acts as a basic computer by executing simple mathematical operations, such as AND or OR operations, leading to various structures and complex motions. It is expected that such a system contributes in developing artificial muscles and gene diagnoses, as well as building nano-machines in the future,” Kakugo said.