Sometimes in the wake of testing for one thing, something more advanced with greater potential comes along.

That is just the case when in the process of testing coal miners’ safety gloves to help reduce lost-time accidents, researchers took it to another level.

That is when Eduardo Sosa, a research associate professor in mechanical and aerospace engineering in the Benjamin M. Statler College of Engineering and Mineral Resources at West Virginia University, and Marta Moure, a post-doctoral fellow from Carlos III University of Madrid, Spain, took it to the next level when they were able to reduce the need for future physical testing of the gloves through computer simulations.

“Ultimately what the mining industry and miners need is to select the most appropriate glove for their safety concerns,” Sosa said.

The process was a nearly two-year journey across engineering disciplines and the WVU campus.

Faisal Alessa, a Ph.D. student in industrial and management systems engineering, used an accident database analysis to find a significant number of hand injuries in coal mines come from dropping objects such as drill steel, roof bolts, rocks and tools.

He found these injuries have caused a loss of nearly 900,000 production hours from 2000-2018 across mines in the country. Based on this information, Sosa and his team designed and built a testing apparatus to conduct controlled impacts to replicate the weight and impact of dropping hexagonal drill steel typically used in roof bolting operations. 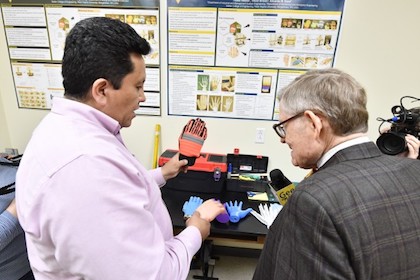 Tighter Field
From a field of 45 glove manufacturers, Sosa narrowed the scope to nine that protected, in varying degrees, the metacarpal bones, joints and soft tissue of the hand, and included different combinations of thermoplastic rubber and fabric layers. For filler, the team started simply — wooden dowels roughly the size of a man’s fingers in a latex glove. The glove offered no protection and the dowels had no soft tissue or joints, so the damage from the falling roof bolt did not replicate injuries a coal miner would receive in a similar accident, but provided valuable initial information about the range of forces resulting from the controlled impacts.

Sosa moved on to develop a more realistic surrogate hand including the creation of 3D printed “bones” based on laser-scanned actual bones. Next they developed a form, also constructed with the 3D printer, and poured medical grade synthetic ballistic gel, which better represented the soft tissue of the hand.

For the impact tests each hand specimen was divided into four zones —fingers, knuckles, the metacarpal region and the thumb. The hexagonal impactor hit each finger, each knuckle and each metacarpal bone for 15 hits per hand specimen and per glove. Then each test was repeated five times and average impact reaction forces were calculated for each position and each type of glove for nearly 250 impacts.

While the synthetic gel hands provided a decent representation of protection-to-injury, it still wasn’t quite an actual hand in those gloves, so Sosa turned to another part of the WVU campus for assistance. Through the WVU School of Medicine and the Human Gift Registry, Sosa’s team got access to cadaveric hands to study the level of forces on the hand during an impact, as well as the level of damage produced by the impactor.

Hand Model
He had specific requirements: The hands had to be from males 30-to-60-years-old and could not have had an illness that could significantly affect the bone condition.

After five months of preparation, including bio-safety training and vaccinations to protect them from potential biohazards, Sosa and his team were able to move their equipment to a lab at WVU Health Sciences to begin the final phase of testing.

They performed the same tests in the same way they had with the synthetic gel hands but had the advantage of capturing X-ray images after the impact tests revealed the actual bone and soft tissue damage.

“As expected, different glove models offer different levels of dissipation of impact forces; also, the stiffness of the different surrogate hands we have been using influences the forces measured during the impact tests,” Sosa said. “If we use the same type of hand wearing different gloves, we have an equal basis for comparison.”

Physical testing is always “complicated and resource-intensive,” Sosa said. His team will continue using their experimental results to calibrate the computational models of the hand they are developing for further testing of impact scenarios and glove materials.