Thumbs Up in MA Nuke Inspection 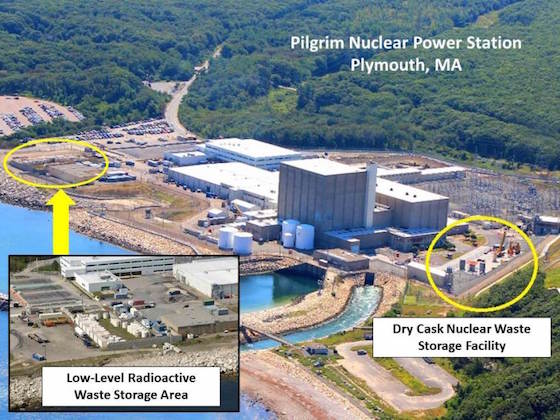 Dry casks filled with more than 500 spent fuel assemblies sit outside the Pilgrim nuclear plant on the right hand side of the photo.

One of the United States most dangerous nuclear plants, Pilgrim Nuclear Power Station, ended last year on a strong note, with no violations found during a fourth-quarter inspection conducted by the Nuclear Regulatory Commission (NRC).

“This positive report is a result of the months of hard work that Pilgrim’s employees have undertaken to continuously improve the plant’s operations and safety,” said Patrick O’Brien, spokesman for Entergy Corp., Pilgrim’s owner and operator.

The NRC’s findings for Pilgrim’s performance from October through December released last week.

Inspectors conduct a sampling of systems during their quarterly visits. Among areas examined in December were the Plymouth, MA, plant’s readiness for extreme weather conditions, flood and fire protection equipment and procedures, maintenance effectiveness and maintaining emergency preparedness.

Inspections conducted in the first three quarters of 2017 had turned up several deficiencies.

Pilgrim had three violations in its first quarter, five in the second and seven in the third quarter.

Two of the three violations found in the first quarter were connected to staff performance.

In the second quarter, the five violations reflected the staff’s failure to follow procedure and keep parts in good working order. In one case, operators incorrectly aligned valves, causing 55,000 gallons of water to rush into the base of the nuclear reactor. It took four hours to drain back out. Another case involved two dampers whose job is to prevent the escape of radioactivity failing to close automatically. They only needed to be cleaned and lubricated.

Seven violations in the third quarter were connected to procedural shortcomings and poor equipment maintenance. In one instance, Entergy failed to replace a part in a safety relief valve for 24 years, causing the valve to fail when tested.

Pilgrim operators have since addressed the shortcomings found by the inspectors during those quarterly visits.

Inspectors also discussed the challenges of the plant’s spent fuel pool in their quarterly report.

Heat and radiation have eaten away at the protective compound over time.

In the spent fuel pool environment, the minimum critical volume necessary to sustain a nuclear chain reaction may be as small as four fuel assemblies.

In December 2016, Pilgrim operators reported nearly 900 Boraflex panels were in danger of deterioration.

Early in 2017, federal inspectors cited Entergy for not coming up with a satisfactory long-range solution to the problem.

Entergy has since shifted about 1,600 of the nearly 3,000 spent fuel assemblies in the pool. The fuel assemblies that are hottest, having more recently been removed from the nuclear reactor, are put into areas away from the deteriorating Boraflex panels.

Under Phase 2 of Entergy’s plan to address panel deterioration, scheduled for this year, the company plans to move about 600 spent fuel assemblies from the pool to nine heavy concrete dry casks that will be set up outside the reactor building. Eight other dry casks, filled with more than 500 spent fuel assemblies, are already there.

Just under 600 highly radioactive spent fuel assemblies will be removed from the reactor shortly after it is permanently shut down. The assemblies must remain in the pool for three to five years before they can be placed in dry casks.

Because there is no federal repository for the spent fuel, it may remain on the Pilgrim property in Plymouth for decades.