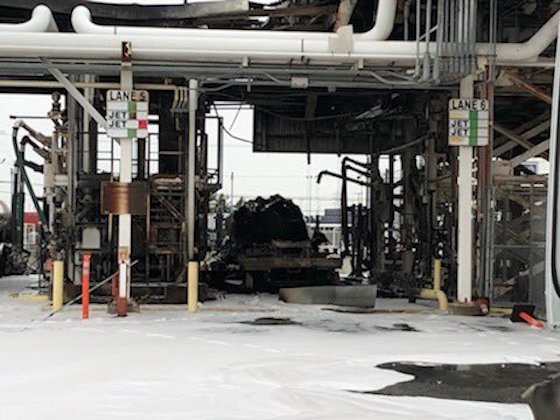 One worker was sent to the hospital and a tanker truck and other equipment suffered damage at a fuel terminal in Carson when jet fuel being loaded on to the tanker ignited.
Source: Los Angeles County Fire Department

An explosion and a fire at a fuel terminal in Carson, CA, sent one person to a hospital with injuries Monday morning, fire officials said.

In addition, three others ended up evaluated at the scene and then released.

The explosion at Kinder Morgan’s Carson terminal in the 2000 Block of E. Sepulveda Boulevard was reported at 5:45 a.m., the company said in a statement.

The blast led to a fire on a truck rack at the terminal. Video from the scene showed firefighters spraying a badly damaged tanker with white foam.

A Kinder Morgan spokeswoman said the fire was isolated to the truck rack.

A plume of black smoke could be seen hanging over Carson early Monday as a result of the fire.

The spokeswoman said the company was aware of one person who was injured, a truck driver. She said the driver was not a Kinder Morgan employee. She said all of the company’s employees at the terminal had been accounted for.

The company said the driver was transported to a local hospital.

The terminal was evacuated during the fire, and a nearby road was closed.

Kinder Morgan and fire officials said an investigation will be conducted into what caused the fire.

The company’s Carson terminal, which it acquired in 2001, spans 100 acres of pipelines and storage for crude oil, petroleum products and ethanol. Kinder Morgan is one of the largest oil and natural pipeline companies in North America, according to its website.